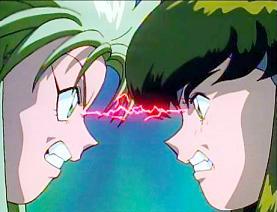 The atmosphere between them is charged with tension.
Advertisement:

A Comedy Trope in which two rivals lock gazes, snarling at each other but not yet at blows, the intensity of their shared enmity manifests as crackling streamers of lightning arcing back and forth between their eyes as sparks begin to fly.

See also Death Glare. Compare Eye Beams, which can be this trope except when it's not just for dramatic effect.