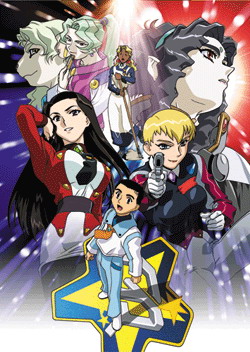 Tenchi Muyo GXP: Galaxy Police Transporter is a Spin-Off of the Tenchi Muyo! series (specifically, the original OVA incarnation), directed by Shinichi Watanabe. It begins during episode 5 of the third Tenchi OVA and progresses further outwards from there, providing something of a detailed look at the series' Verse and life in "civillized" space, as opposed to the original, which by and large mostly takes place on Earth and in uninhabited space.

The focus character is Seina Yamada, a young man with a kind heart, a spiky crewcut that is unusually pleasant to the touch, and the absolute worst luck ever (His bicycle frequently falls to pieces while he's riding it, doorknobs snap when he's trying to open them, windows and awnings collapse when he's under them, the horse you've bet on loses its jockey while you're listening when he passes, etc). The series opens with said luck bouncing him and anyone in his path around while he hurries to visit Kiriko, a childhood friend who just returned after months out of town. Tempting fate, he takes a shortcut by the home of Tenchi Masaki, whom he admires and respects — just in time to be knocked in the lake by a passing spaceship. This begins his chance encounter with Amane Kaunaq, a Galaxy Police officer who had stopped off on Earth to make a delivery to Tenchi. She assumes that Seina knows about Tenchi's houseguests, and she's impressed that he survived the crash in such good shape, so she gives him an application form for the "GP" and tells Seina to look her up.

Seina finally meets Kiriko, and the visit goes fairly well — although he has trouble explaining the lipstick on his neck! Afterwards, Seina's family forces him to complete the form (they think it's a lottery application), and he's abducted and shanghaied into the Galaxy Police by the end of the episode. Luckily for him, his terrible luck makes him a natural-born magnet for Space Pirates, and he's soon convinced to try to use his "powers" for good. Before even finishing his training, he is assigned to the GP's decoy unit, which hopes to use his luck as a weapon in order to draw out more pirates and crush them. Of course, since Seina is Willfully Weak, he also acquires a sizable Harem, who, true to the spirit of Tenchi Muyo!, fight over and embarrass him at every possible opportunity as they hunt down pirates, deal with the intergalactic bureaucracy, and of course, enjoy lots and lots of Hot Springs.

Tenchi Muyo GXP builds on both the formula and setting of the original Tenchi series. Funimation has released this series in English, and it aired on the [adult swim] Toonami block on Saturday nights at 3:00 AM (following in the footsteps of the first two Tenchi Muyo! OVA series, Tenchi Universe, and Tenchi in Tokyo, all of which aired on the original Toonami block on Cartoon Network, albeit heavily censored).