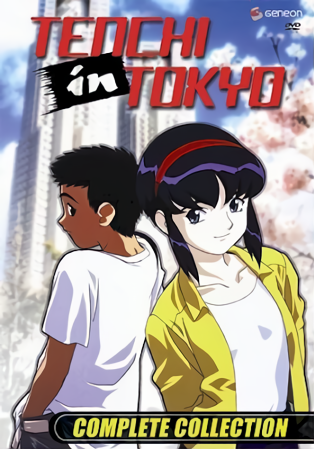 The second TV series based on Tenchi Muyo!, Tenchi in Tokyo is very different from its predecessors. It includes a different backstory for the main characters but in general seems to assume that viewers are familiar with previous versions of the storyline.

In this series, Tenchi just wants to be normal, so he leaves his harem behind to go to school in Tokyo and work at his grandfather's friend's Shinto shrine. Upon settling in his new apartment and enrolling at his new school, Tenchi soon finds himself encountering Sakuya Kumashiro, the most popular girl in school who is (naturally) smitten with him and things seem good and normal at first for Tenchi, but it's soon revealed that a mysterious girl with fearsome powers named Yugi is threatening to not only take over all of Tokyo, but the entire world as well and it's up to Tenchi's harem (who are all trying to see him anyway) to come and save him... not just from Yugi, but also from Sakuya!

The first half of the series is something of a Monster of the Week situation, but the later portion sees the traditional crew falling apart, only to come back together when they're really needed.

Tenchi in Tokyo provides examples of:

Ryoko blows up a karaoke bar.

Ryoko blows up a karaoke bar.