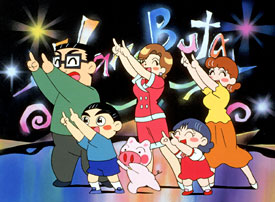 Tokyo Pig, probably better known in Japan as Hare Tokidoki Buta (はれときどきぶた or "Cloudy with a Chance of Pigs") than in the rest of the world, is a comedy anime directed by Shinichi Watanabenote Who should not be confused with Shinichi"rou" Watanabe who directed Cowboy Bebop, an anime meant very much for older viewers. based on a series of picture books. The show revolves around the main character, a young boy by the name of Noriyasu (or Spencer in the English translation), and his pet pig, Harebuta ("Sunny Pig) which he created by drawing him in a magic diary. Other cast members include "mama" and "papa", his sister Tama-chan (Dizzy Lizzy in the English translation), and a weather lady called Yamada-ana (literally, "Announcer Yamada").

The show thrives on lightning-fast delivery and a somewhat unorthodox over the top style of humor, which of course Nabeshin had something to do with. Additionally, the show has No Fourth Wall and a lot of the jokes are from characters addressing the audience and humorous asides. The artstyle of the show is very simplistic, but effective and a bit different than most other shows. It includes almost every anime comedy trope known to man.

A poor dub was made by a company called "Studio E", and distributed by Miramax Television, airing on what is now Freeform, with only 28 episodes (out of 61) adaptednote And even then, except for the first two episodes, they were adapted Out of Order, and many were skipped, plus, the dub never made it to the end. Additionally, only eight episodes were released on DVD. It's woefully ignored by fansubbers, so the only way to view it is by scouring Nico Nico Video. This is why the show isn't well known outside of Japan (the only other place where it's famous is Philippines where it's known as 'Sunny Pig'). It's very much worth the effort though, and the jokes are generally quite easy to follow even without knowing Japanese, and if you're familiar with Nabeshin's other works, you'll know more or less what to expect. Thankfully, someone had uploaded all 61 episodes, with subs, on Youtube.