What Is This Feeling? 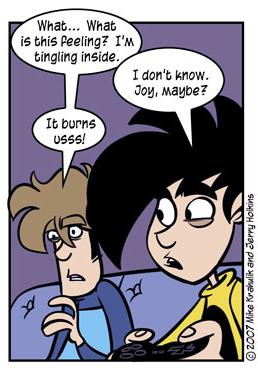 It took planting fruit that eats souls, which can be eaten for his HP to gain XP, in a 2D sidescrolling RPG brawler set in a book for this to occur.
"What is this powerful new juice coursing through my core source? The juice aches. Is this the rumored ache of feeling? The feeling of caring unknown to lemons?"
— Lemonjon, Adventure Time
Advertisement:

So you have a character who's usually defined by a certain mood. Maybe they're always calm and inexpressive, or cheery and upbeat, or brimming with rage, or moping; whatever it is, this mood defines them to the audience and the cast. But every once in a while the planets align and something happens that brings this person a momentary change of heart. This can come as a shock to the audience, the rest of the cast, and sometimes even the character themself! They were so used to their normal state of mind and they're not sure what's going on when that smile starts to spread across their face or their eye starts to twitch in that odd way. They can only ask—"What is this feeling?"

Bound to happen at least once to any Emotionless Girl and in the Defrosting Ice Queen scenario.

For specific types of feelings that can evoke this, see Unknowingly in Love, What Is This Thing You Call "Love"? and Is This What Anger Feels Like?

Compare Not So Stoic and First Time Feeling.

Bruce discusses a new feeling he is experiencing. And he likes it.

Bruce discusses a new feeling he is experiencing. And he likes it.