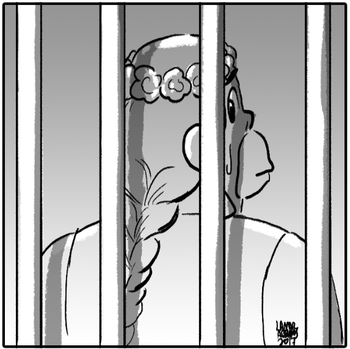 Steven pops out of the water to see Greg being groomed by two humans who Greg introduces to be Wy-Six and Jay-Ten. Steven expresses his worry, having believed the containment area was a dystopia where the humans were all chained up to a wall doing tricks for peanuts. Greg reassures Steven, and introduces him to the inhabitants to whom he had told stories of Steven such as "the bits". Steven informs Greg that there is a door they could not open from the other side, so the two plan to find that door tonight and figure out a way to exit the Zoo.

The little voice greets the inhabitants in the containment to begin the daily routine which includes eating, playing, reaching into outer space, smelling the flowers, and cleaning up with a refreshing bath before taking a nap at night. Steven is discomforted throughout, however, because the utopia is actually a glorified prison. Greg understands why everyone else is so happy because they do not know they are trapped here since they have never been anywhere else and on top of that, the prison is a utopia.

Night sets in and everyone goes to sleep except Greg and Steven who search for the door Steven mentioned earlier. Steven bumps into the door and tries to open it by bashing on it which attracts Wy-Six and Jay-Ten. They think it is a game Steven is playing, but Steven tells them he has to get the door open which they do not know such a thing exists. However, Jay-Ten recalls a time where the door or "opening wall" let a Gem through to help someone who was "hurt". They do not know what "hurt" is, so Steven explains. Afterward, Steven tries to get Greg to punch him in the face. Greg declines but offers Steven to punch him instead. Greg is sent flying into a tree after a dud from concern, but it does not get the door to open.

The little voice announces the "choosening" has begun. The inhabitants surround the "circle of choosening". According to Wy-Six, it is a very special event that he is glad to have Greg here with. It is seen that the choosening is a matchmaking ceremony between two random people. Being a possible candidate for anybody stresses Greg, but Jay-Ten says anybody here would be very lucky to have him. Luckily for Jay-Ten, Greg is matched with her, but Greg refuses, as back on Earth, there was no "little voice" that controlled their lives or "choosened" them for someone, but rather there existed free will. Steven backs him up by mentioning how Rose and Greg's relationship took time knowing each other to fall in love, resulting in them "choosening" each other.

After the explanation, the human inhabitants all decide that they choose Greg. However, Greg has a say in the situation as well, so he declines being chosen and choosing anyone as well. This makes the inhabitants cry and experience the feeling of being "hurt" for the first time. They beg Greg to take the hurt away and chase him and Steven. The Amethyst guards open the door and rush into the containment to avert the crisis. This gives Greg and Steven an opportunity to exit through the door. They attempt to escape but are stopped and caught by an Amethyst, who informs them that they are in deep trouble.