Recap / Steven Universe S4E14 "That Will Be All" 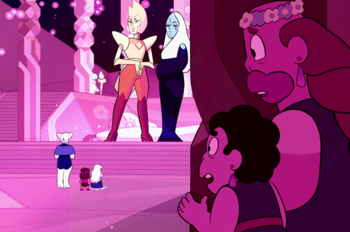 Steven and Greg have been captured by the giant Amethysts who guard Blue Diamond's human zoo! As they prepare for the worst, a door opens—revealing the Amethyst they and the viewers know and love. She's laughing hysterically, and telling all the other Amethysts that she knew they'd fall for the prank.

Once that moment of relief passes, the rest of the Famethyst, as our Amethyst has come to call her sister/cousin Amethysts (plus Skinny Jasper and Carnelian), allows them all to leave so they can get back to the Roaming Eye and make their escape.

In the meantime, Ruby and Sapphire are touring with Holly Blue Agate until they come face to face with Blue Diamond herself. Sapphire thinks quickly and insists their purpose for being here is to bring Blue Diamond more specimens for the Zoo. As Steven and Greg try to make their escape, they run into a chamber where Blue and Yellow Diamond are talking. Steven begins to weep Blue's tears again as the former tells the latter she wants to hold on to as much of Pink Diamond as she can. Yellow Diamond's position is that they're all terrible reminders which should be destroyed to stop them having to see them and be reminded. There's an entire room of bubbled Rose Quartz gems above them. As the pair break into a heartwrenching musical number, Steven and Greg make their way to the doors.

Yellow Diamond: ♫ What's the use of feeling, Blue? ♫

Finally the Gems, Steven and Greg are all united again. Holly Blue Agate sees this and at first does not accept this is an escape/rescue. The Famethyst is there, waving an enthusiastic goodbye. Ruby and Sapphire merge back into Garnet, at which point Agate finally speaks up, threatening to tell Yellow Diamond.

Pearl hops down from the ship, gets right into Agate's face, and points out while running and telling the Diamonds was never a good idea, now that the jig is up, telling them will only make Agate herself look foolish: losing one of the zoo specimens to three gems. Pearl also points out to Holly Blue Agate that she will lose face because those rogue gems also bested her. Steven and Pearl complete the "that will be all" dismissal and take off for Earth again.

Ever since Pink died, she's been mourning non-stop--for 6,000 years straight.

Ever since Pink died, she's been mourning non-stop--for 6,000 years straight.