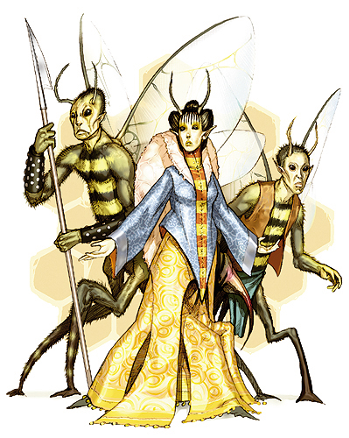 Oftentimes, when Bee People show up to fight a Bug War against humanity, while the humans use the full panoply of technology, including spaceships, tanks, Powered Armor, and military aircraft, the Bugs are likely to use specialized castes of their own race instead, with a large level of polymorphism between different castes of the same species to adapt them to specialized roles. This system is actually inspired by certain Real Life ants, bees and termites, who indeed come in several of the varieties seen below.

Since the Ants and Bees that inspired this trope have all-female worker castes, this often leads to a sort of One-Gender Race.

When aliens have a caste system, but the various castes are not physically very different, that's not this trope, that's Fantastic Caste System. Often leads to Crippling Overspecialization for individuals, or is a way to avoid it for the race as a whole.