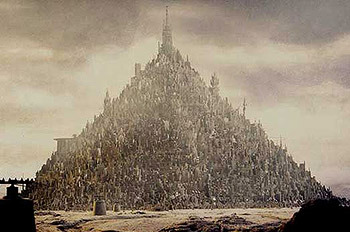 May or may not be a Wretched Hive.
"Even dimmed by the weather, the City was a tremendous thing to see. The Police Department was in the upper levels of City Hall, and City Hall reached high. From the Commissioner's window, the neighboring towers fell short and their tops were visible. They were so many fingers, groping upward. Their walls were blank, featureless. They were the outer shells of human hives."
— The Caves of Steel
Advertisement:

A Hive City is a Mega City, but whereas most mega cities look pretty much like our modern cities although spread over a larger area or with way more tall buildings, a Hive City is not built up of individual buildings but is in fact one gigantic building. In many ways, it's more akin to an anthill or a hive than to a standard modern day city.

Some hive cities started out as regular mega cities or skyscraper cities but then built generation after generation of buildings on top of each other until they all interlinked into one. Another case is that the city is built in a poisonous environment or vacuum and thus must be a closed environment. Or the people who built it were not human and simply had a very different mindset than humanity when it comes to housing. If it's the last case, it may be inhabited by Bee People.

Sub-Trope of Mega City. Supertrope of Arcology, where a hive city is a completely self-contained system. May overlap with Layered Metropolis. In extreme cases, it may be large enough to qualify as a City Planet. For hives of a metaphorical sort, see Wretched Hive; notably, Hive Cities also tend to be Wretched Hives more often than not.