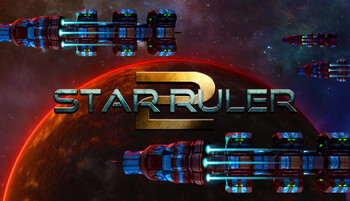 Star Ruler 2 is a 3D Real-Time Strategy 4X title from indie developers Blind Mind Studios. The game focuses on annihilating every other empire in the randomly generated galaxy.

It incorporates multiple unique races with different mechanics rather than the Cosmetically Different Sides of the previous game:

Like the original, it has a heavy focus on the Design-It-Yourself Equipment, allowing players to make ships to take any size — from a Coke can to the size of the galaxy — or function, from Asteroid Miners to planet killers. The Unstable Equilibrium research system of the game has been significantly toned down, with flat bonuses rather than the continuously scaling bonuses.

It strives to avoid the Command & Conquer Economy, with most planetary buildings being built by the demands of incoming imports via the "Pressure" system; export metals to a planet, and it'll build factories. export artifacts, and it'll build research centers. Only the absolute largest planetary structures require the player's intervention to build.

Diplomacy takes the form of a large minigame of sorts; players propose a treaty such as investigating another player's territory, which all players can vote on and attach riders and clauses to by expending Influence. You can even force votes through to annex other player's territory; it's for the greater good, after all. The often brick-headed and stubborn AI of the first game is far more cooperative and can form alliances or submit to aggressors, becoming a puppet state.