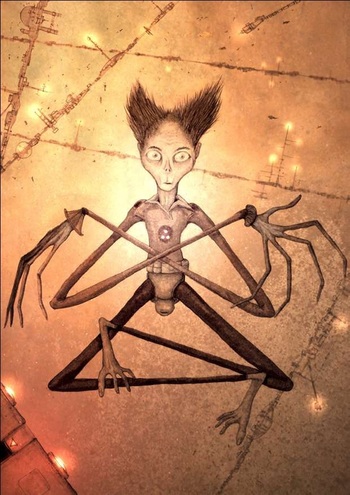 Earth below us, drifting, falling, floating weightless...
The crews of the starships are funny that way
When they're not on a deck they do not like things quiet
They'll turn first a glass then a whole tavern over
Get thrown in the lockup, confined to the field,
And then, in a rush of filled forms and paid prices,
They exit, all quickly, with nothing to say
— Sestina: Midnight stations, Gurps Traveller Starports
Advertisement:

In most Space Opera settings space travel is commonplace and routine, but in some settings there are people who spend almost their entire lives in space. These people were born and raised on a starship or space station and can't imagine living on a planet or natural satellite. Often they act as traders, with an extended family owning and operating a ship.

Recently, with knowledge of the ill effects of extended periods in space, Spacers are increasingly portrayed as a genetically engineered subspecies that does not experience muscular and skeletal degeneration from zero-gravity, is immune to radiation, has prehensile toes, and so on. In softer settings, however, they may still be portrayed as normal humans who happen to live in space, perhaps thanks to Artificial Gravity. Even if they may be Transhuman, their main reason for living in space is usually cultural: they consider it their own place. Even if they visit planets occasionally, they do not feel particularly attached to them, and may even consider them unpleasant.

If a Fantasy Counterpart Culture, they may be comparable to Romani or other nomadic Earth-cultures. They often make excellent engineers and pilots. They usually won't have any government beyond clan elders.

Compare Generation Ship, where multiple generations are born and live out their entire lives on board a slow-moving ship headed for a distant planet.

Space Nomads are a common subtrope, as are Transhumans in Space.