Literature / Citizen of the Galaxy 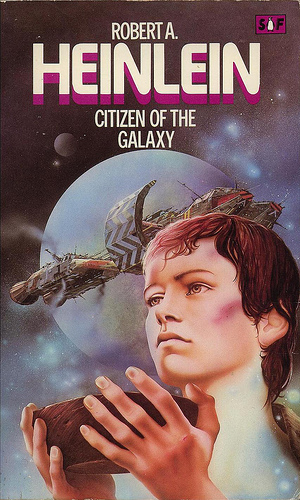 Citizen of the Galaxy is a science fiction novel by Robert A. Heinlein first published as a serial in 1957 and part of the twelves works he wrote for juveniles.
Advertisement:

For as long as Thorby can remember, he's been a slave, futilely resisting as he was sold to a succession of masters. Now, in the slave markets of the space port of Jubbulpore (capital of the Nine Worlds), he's bought by the beggar Baslim the Cripple, for the token sum of nine minims. Thorby eventually learns that Baslim is far more than he appears, as the old man teaches him lessons about how to both think and live as a free man, while enlisting his help in spying on the ships arriving at the port.

When Baslim is hunted down and killed as a spy, Thorby is forced to obey the last request of his Pop and escape on one of the ships of the Free Traders, a insular yet Proud Merchant Race who owe a debt to Baslim that can't be repaid — although adopting Thorby would be a good start.

So Thorby begins a journey that takes him from one end of the galaxy to the other, and his journey that started with him in the depths of slavery catapults him to the highest levels of society. And at every step, he has to struggle with the nature of freedom and how he can find it in his circumstances, even while fulfilling his responsibilities.

A graphic novel adaptation of this novel was successfully Kickstarted in 2013, and was published by IDW Publishing in 2015.

However, she is able to provide him with valuable insight and support as he is assimilated into a culture that is foreign to him.