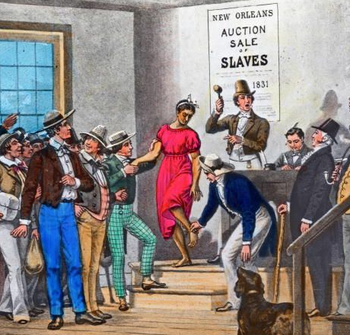 Lincoln at New Orleans Slave Market by Joseph Boggs Beale
[There is in Gao] a market where many slaves, men and women, are sold every day. A girl of fifteen is worth about six ducats. Little children are sold for about half the price of grown-ups.
— Leo Africanus
Advertisement:

A Setting Trope, this is a place where people meet to buy and sell slaves. It can be a stand-alone thing, or it can be part of a much larger market. In well-thought-out settings where slavery is commonplace, many of the largest slave markets will be situated near the largest markets for other merchandise, on account of the simple merchant's rule: follow the money. For this reason, a slave market is usually a sign that the place it is located in is rich, or is very strategically useful or convenient to another place that is rich; a larger market usually signifies a richer locale. The presence and size of the market will also be a sign that whoever runs it is powerful — since slaves were historically taken in war — and highly unequal — since one of the other main ways to become a slave across history was to get deeply indebted to a rich neighbor — and (in modern works) probably decadent and possibly evil.

In fact, in Sword and Sorcery fantasy stories and Sword and Sandal stories set in ancient history, the slave market may be treated as just part of the usual setting furniture, and if not exactly treated with approval, not a major moral issue either; slavery is just something (bad) that happens in such settings, so of course there are slave markets. It also shows up in some sci-fi and Days of Future Past fiction, often as an institution found on a Planet of Hats which practices slavery. In visual works, the slave market scene may serve as a rather sleazy excuse to slip in some Fanservice, an amazing proportion of the slaves being young, attractive, and under-dressed (for customer inspection, of course), and often female. (This is a habit that goes back at least to Victorian painters, who took all sorts of "classical" scenes as excuses to slip a lot of nudity past the period's active Moral Guardians.) In stories set any time in the last couple of hundred years, though, slavery is almost always treated as unambiguously evil, with the slave market being a big sign of the society's moral degeneracy — although there may still be some fanservice. If it's actually set in the Present Day, it'll probably be an underground slave market managed by Human Traffickers and depicted as nightmarishly grim.

Please note this does not refer to a general market that happens to sell a few slaves every now and again; the place has to have an ongoing slave trade.

Often located in a Wretched Hive. The slavers will usually be villains in the story, because Slavery Is a Special Kind of Evil. However, the occasional Sympathetic Slave Owner may show up.

Compare Auction of Evil, which can overlap. If it's sentient, non-human characters who are being sold at these markets, see Superhuman Trafficking.