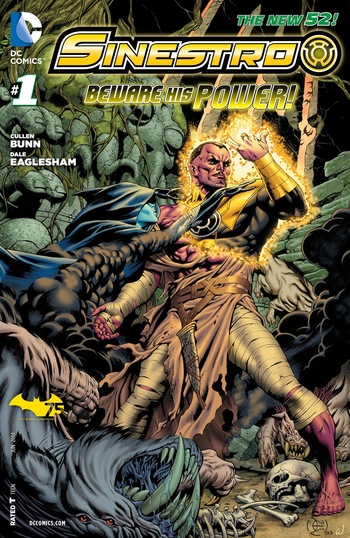 The tide of universal nothingness is rising. An emptiness spreading like a disease, consuming everything it touches. A religion of anti-emotion grows, tended by shepherds who bolster the flock by force if necessary. The Paling eats away at the very foundation of the universe. But fear is the counter-engine that can turn back the flood.
— Lyssa Drak
Advertisement:

Sinestro was a DC Comics series, part of its New 52 line-up. Spinning off from Green Lantern, it follows Thaal Sinestro, once the greatest Green Lantern and later its worst traitor, as he tries to retake control of the Yellow Lantern Corps.

For the title character and the rest of Yellow Lantern's character sheet see GL - Sinestro Corps.