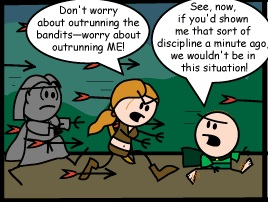 "You want to be afraid of somebody, be afraid of ME!"
— Block Warlord from Judge Dredd (context viewable here)

When you think someone on your side may give in to the other side out of fear, trying to outscare the enemy might be a way to counteract this.

This is essentially a competition between two sides for the title of The Dreaded.

It's a common leadership technique of Drill Sergeant Nasty, The Commissar and Sergeant Rock, or other kinds of anti-heroes who sees this as a means justified by a goal. See also I Control My Minions Through..., where fear is one of the means. The Mob Boss Is Scarier is a specific subtrope related to the world of crime dramas.