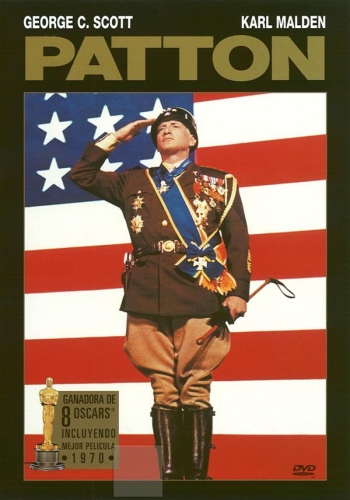 "Now I want you to remember that no bastard ever won a war by dying for his country. He won it by making the OTHER poor dumb bastard die for HIS country."
— George S. Patton
Advertisement:

Patton is a 1970 film directed by Franklin J. Schaffner and co-written by Francis Ford Coppola, based on the life of General George S. Patton and starring George C. Scott in his most iconic role.

The film concerns Patton as he leads the American forces during World War II. On the battlefield, he was a competent commander respected by both sides. Off the battlefield, Patton's planet-sized ego and volatile temperament more than often reared its ugly head. While Patton believed himself destined for greater glory, his very delusional temperament is what proves to be the undoing of his military career. This was the winner of seven Academy Awards, including Best Picture of the Year.

Scott reprised the role in a much lesser-known 1986 TV sequel, The Last Days of Patton, which takes place during and after the car accident that took his life, as well as his earlier career during World War I.