Film / The People vs. Larry Flynt 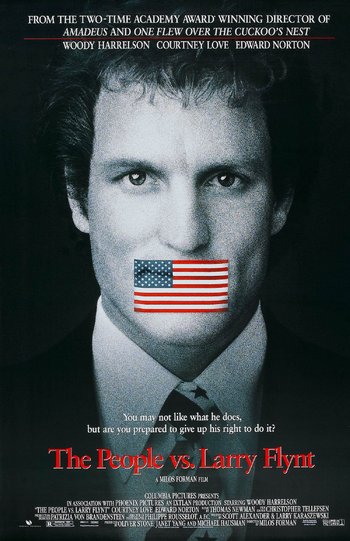 The People vs. Larry Flynt is a 1996 biopic directed by Miloš Forman about Larry Flynt, the founder of Hustler magazine. Woody Harrelson stars as Flynt, with a supporting cast that includes Courtney Love, Edward Norton, and James Cromwell.

The film begins with him as a young boy selling moonshine to hillbillies and ends with him hearing about the outcome of his Supreme Court case. Along the way, the virtues and downsides of organized religion, pornography, capitalism and free speech are explored. It is the second of screenwriters Scott Alexander and Larry Karaszewski's trilogy of Biopics of "anti-Great Men," after Ed Wood and before Man on the Moon, about Andy Kaufman.

The film was nominated for two Academy Awards, for Best Actor (Harrelson) and Best Director (Forman).

"The Tropes Vs. Larry Flynt":