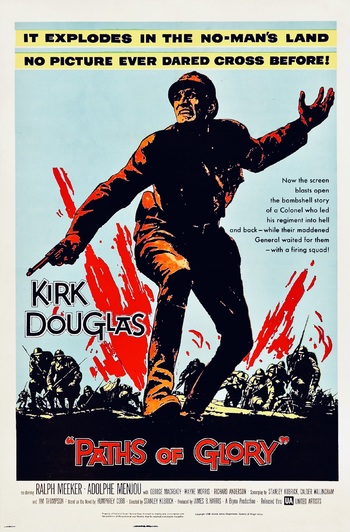 Paths of Glory (1957) is an early Stanley Kubrick film and also one of his most critically acclaimed. It's an adaptation of a 1935 novel by Humphrey Cobb, with a screenplay by Kubrick, Jim Thompson and Calder Willingham.

During World War I, French Army General Mireau (George Macready), seeking a promotion from his superior General Broulard (Adolphe Menjou), orders a hopeless attack by his depleted division against a strongly fortified German position. When the attack quickly fails with heavy losses, the enraged Mireau tries to shift the blame for the loss to his soldiers and orders three men to be tried under penalty of death for cowardice, opposed only by his subordinate Colonel Dax (Kirk Douglas), who seeks to save the lives of his men.

Paths of Glory is Very Loosely Based on a True Story, namely the Souain corporals affair

. The event is considered one of the most egregious and most publicized examples of military injustice during World War I in France.