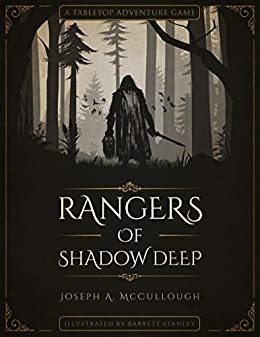 Holding back the shadow, one battle at a time.
A kingdom stands on the brink of destruction, as the vast realm called the Shadow Deep slowly swallows everything in its path. As the army fights to contain the tide of evil creatures teeming up out of the black clouds, the kingdom’s best soldiers, the rangers, must venture down into the shadows to gather information, rescue prisoners, and ambush enemy supply lines. It is a desperate fight against overwhelming odds, but every little victory brings another day of hope.
Advertisement:

Rangers of Shadow Deep is a skirmish-level single-player/cooperative Fantasy Tabletop Game by Joseph A. McCullough, creator of Frostgrave and its spinoff Ghost Archipelago. The game uses a variant of those games' rules system for its basic mechanics, coupled with a simple set of rules to govern the behavior of enemy characters and a number of random event mechanics to keep the players from growing complacent. Gameplay is divided into missions, which are further divided into scenarios. Each player builds a primary character (the titular "ranger") to serve as their representative in the game; depending on how many rangers are playing in a given scenario, the players also receive a certain number of Recruitment Points that can be spent on other fighters and support characters ("companions"). The intent is for the game to be played as an ongoing campaign, with each player's ranger and companions growing in skill and power as they progress through the story.

The Good Kingdom of Alladore has enjoyed a long period of relative peace since its most recent major conflict, a war with the neighboring kingdom of Lorenthia, was resolved nearly a century ago. Maintaining this peace are the rangers, an elite cadre of professional adventurers who wander the land, righting wrongs and rooting out threats to the kingdom. All of that changes, however, when Lorenthia is swallowed overnight by the Shadow Deep: an all-consuming black fog from which emerges a seemingly endless horde of hideous monsters, shambling corpses, and the occasional demon. The Shadow Deep has destroyed countless kingdoms in the past, and it seems clear that it's only a matter of time before Alladore falls as well. It now falls to the rangers to fight a delaying action against the Shadow Deep, performing scouting missions and raids into its territory to gather information, rescue survivors, and disrupt the enemy's supply lines. With every victory, they buy more time for Alladore to rally its defenders, call upon its allies for aid, evacuate civilians... and maybe, just maybe, find a way to defeat the Shadow Deep once and for all.

A number of products have been released for Rangers of Shadow Deep, mostly in PDF and print-on-demand form via DriveThruRPG.com