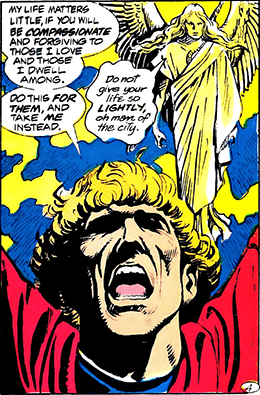 A character offers themself in exchange for the freedom of another, willingly turning himself over to the villain in order to buy the safety of someone who will most likely be a love interest or a friend, although sometimes it's a complete stranger that the hero just met but has nevertheless decided that it's his job to save. And so a trade takes place, but this time the hero is using himself as a bargaining chip. (If the other character is aware of what is going on, a More Hero than Thou dispute may arise.)

This is a specific kind of Heroic Sacrifice that may or may not end in death. Sometimes the Damsel in Distress, the Distressed Dude or the Badass in Distress is rescued by their friends or manages to escape by the end of the story, if they're lucky, but they usually won't try to escape on their own. As long as the villain keeps his end of the bargain, they're content to suffer in the other person's place.

Sometimes the villain has requested that the hero turn himself in, offering to free his hostage in exchange for the person he really wants. Often in such cases this was the villain's plan all along for getting his hands on the hero, as he is able to predict that the hero would sacrifice himself for the hostage. In other cases where the original hostage is the intended target, the sacrificer will shock the villain because Evil Cannot Comprehend Good.

In situations where Balancing Death's Books comes into play, a character makes this kind of deal with Death in order to save someone who is scheduled to die.

Character types most likely to perform this action are the All-Loving Hero, who really can't help it, and The Atoner, for whom Redemption Equals Death. More than once, also, this is how the Damsel in Distress or Distressed Dude enters the scene, by trying futilely to protect someone else in their surroundings.

False Confession is a variant seen in Police Procedurals involve someone confessing to murder or something comparable in the hope (or perhaps unspoken agreement) that the investigation stops there rather than lead to the arrest of a loved one.

Compare and contrast Silent Scapegoat and I Am Spartacus, which both differ in that a character is specifically taking the blame for the actions of another by claiming to be them, More Expendable Than You, in which the character is protecting someone he considers more important, Draw Aggro which is basically "come after me instead", Go Through Me which is basically "you'll have to defeat me to get to them", Prisoner Exchange, in which someone from the villain's team is captured and traded for the hostage, and Offering Another in Your Stead, where the character willingly sacrifices someone else for their own safety.

When Belle discovers that her father Maurice has been captured by the Beast of a castle, she offers to be imprisoned herself in his place. He seems skeptical at first, but after extracting a promise from her to stay there forever, she asks to see him in the light. He allows it and she agrees to his term.

When Belle discovers that her father Maurice has been captured by the Beast of a castle, she offers to be imprisoned herself in his place. He seems skeptical at first, but after extracting a promise from her to stay there forever, she asks to see him in the light. He allows it and she agrees to his term.