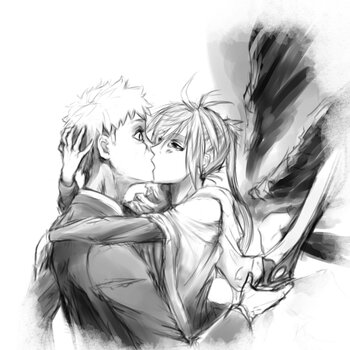 is a Crossover between Fate/stay night and Sekirei, following the Mind of Steel ending of Heaven’s Feel.

16 years after the 5th Holy Grail War, Shirou briefly returns to Japan to pay his respects at Sakura’s grave. However, at the airport the police want to have a word with him after MBI’s scanners found worrying items in his luggage. Mistaking him for a spy, MBI assigns Karasuba to guard him and after an altercation with another Sekirei and Ashikabi, a fight with Karasuba, winging her and learning about the Sekirei Plan. Shirou decides that duty calls. Karasuba is only too happy to help.

with illustrations from the author.