Literature / On the Run 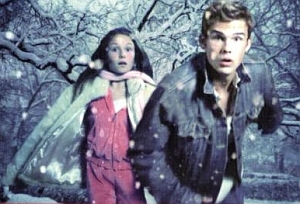 Emmanuel Harris: "Your kids are on the run looking for evidence to prove your innocence. They won't surrender, even if we offer to put them up at Club Med.
Louise Falconer: "I can't believe it! They think they're doing it for us!"
Emmanuel Harris: "There's more. They're leaving a trail of stolen vehicles, breaking and entering, vagrancy, and petty theft behind them."
Advertisement:

A thriller/adventure series by Gordon Korman, otherwise best known for his comedies, though he's written a lot of adventure stories lately. The series was published from 2005 to 2006.

Aiden and Meg Falconer are fugitives on the run. The reason? Their parents were arrested for a crime they didn't commit: treason. With their parents' arrest being a huge media circus, the two were given new last names and transferred to a program for troubled youth (read: juvenile hall on a farm), but managed to escape. Their goal: to prove their parents' innocence. They soon find that in order to survive, they need to break the law. Stealing clothes to replace their prison outfits is just the start, as the two find themselves breaking into houses to hide, stealing food to keep their energy up, stealing money and even in some cases, cars, to be able to get around. And they need to stay one step ahead of the many people who are on the lookout for the juvenile escapees mentioned in the news.

What follows is a massive chase, with Aiden and Meg having to use their wits and knowledge to survive, and sometimes relying on the help of anyone who might become an ally, which sometimes includes some rather shady people who might turn on them at any time.

To make matters worse, it's not just the police who are after the two. An assassin is also out to get them, and prevent them from discovering the truth.

The books in the original series are:

After On the Run, Gordon Korman wrote a sequel series, Kidnapped, which takes place immediately afterwards. Now exonerated, the Falconer family is still hated by many who are unwilling to believe they are innocent.

The story deals with another conspiracy - Meg is kidnapped as part of a much larger cause, and Aiden tries to rescue her, this time with the help of Emmanuel Harris from the original series. Meanwhile, Meg tries many escapes on her own, and also tries to use her wits to send out signals and clues to those who would rescue her - some of which only Aiden understands. Kidnapped is a completely different story. Meg's sarcasm and wit are put more in the background, since she can't exactly banter with her captors the way she could with Aiden in the first series. Instead, the focus switches between Aiden's attempts to rescue Meg, and Meg's attempts to escape.

There's also an additional dynamic: the kidnappers themselves. All three of them have different personalities and different motivations for kidnapping her, and Meg begins to know them quite well, and tries to deal with each kidnapper separately whenever she's left alone with one of them, while trying to take advantage of the one in his twenties, who's the nicest to her.

The major characters in the sequel series are:

The sequel series has three books:

The first series (On the Run) contains examples of: