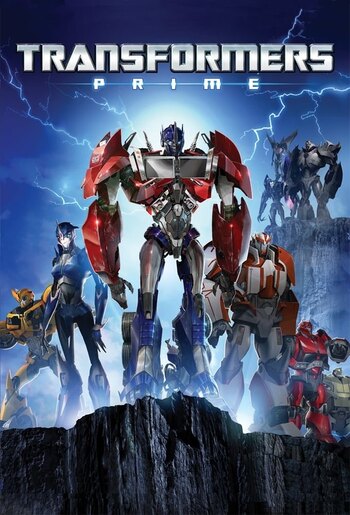 "My name is Optimus Prime, and I send this message: though we did not choose to be of Earth, it would seem that we are here to stay. If you approach this planet with hostile intent, know this: We will defend ourselves. We will defend humanity. We will defend - our home."
Advertisement:

Transformers: Prime is a 65-Episode Cartoon in the Transformers franchise. The series tells the story of a small crew of Autobots defending Earth against the Decepticons, after their home planet Cybertron was rendered uninhabitable from their civil war. The conflict is small, the once massive civilization is scattered around the universe and the factions on Earth are a fraction of that. Humanity does not have knowledge of this secret war. Accidentally caught up in the action are three humans: Jack, Rafael, and Miko, who befriend the Autobots. They act mostly as Naive Newcomers as they watch the robots battle it out, though they do prove useful in their own way due to the limited number of Autobots.

The series slowly built a Myth Arc where the conflict has greater significance than originally believed, as Earth and Cybertron have been connected in the past. The first season details the return of Decepticon activity after an unspecified earlier conflict, with the Autobots bonding with their new human friends. Starscream's position in the Decepticon hierarchy falls apart as he deals with the return of Megatron. Developments in the season finale force Optimus and Megatron together, and they soon launch an arms race throughout the second season over ancient relics from Cybertron. The second season finale concerns a political dispute over the future of their home, and the third season, subtitled Beast Hunters, deals with Megatron's plan to clone a new army of Predacons, and a Final Battle dealing with who controls the fate of Cybertron itself. An epilogue movie called Predacons Rising resolves lingering elements of the Myth Arc and seeds of the future are planted.

The show is animated in CGI but carries a bit of a 2-D flair. The CGI made the show carry a high price tag which fortunately was made affordable by the success of Michael Bay's movies. The overall look and tone of the show follows closely with the live-action films (with Optimus, Bumblebee, and Megatron having similar designs) while it continues to take inspiration from many other Transformers incarnations, and it inspired a new MMO game, Transformers Universe, which was however ultimately canceled over costs and delays. The show received critical acclaim overall and strong ratings. Most notably, it became the first Transformers series to win an Emmy since Beast Wars, with nine wins.

According to Hasbro, Prime is a part of a greater continuity called the Transformers Aligned Universe and is intended to link up with other Transformers fiction such as Transformers: War for Cybertron. Because it is being worked on by different creative organizations, the individual works are not connected by a strict continuity but are considered part of a "continuity family" (much the same way as the G1 cartoon and comics series are similar but separate entities).

"Above all, do not lament my absence. For in my spark, I know that this is not the end, but merely a new beginning. Simply put, another transformation."
Feedback

Example of:
Defiant to the End