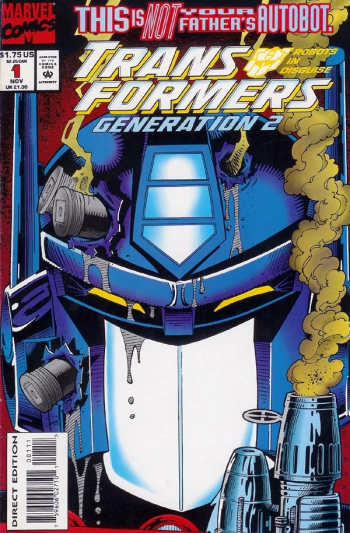 A few years after the original Transformers comic had ended its run, Marvel published a new 12 issue series entitled Transformers: Generation 2. Loosely based off the toyline of the same name, the series was written by Simon Furman, with art by Derek Yaniger and Manny Galan. In keeping with the tone of many comics in the 1990's, Generation 2 had a dark and violent tone, with numerous major and minor characters killed off as Optimus Prime and Megatron fought the vastly superior forces of the second generation Cybertronian Empire. The series lasted from November 1993 to October 1994.
Advertisement:

Reruns of the G1 television series were also marketed under the banner. The Cybernet Space Cube, a 3D CGI model, was used for scene transitions and the opening, which featured a new CGI-animated sequence similar to the toy commercials of the time. Hasbro also launched the Generation 2 toyline around the same time the comic premiered. The first year mostly saw redecoes of older Generation 1 toys with new features such as guns that fire missiles, and in a few cases, soundboxes. Also part of the line were several toys imported from the European G1 line and a brand-new Megatron toy that transformed into a tank instead of a gun due to federal law. 1994 introduced new toys, as well as redecoes of the Aerialbots and Combaticons, and in 1995, it became clear that Hasbro was seriously running out of ideas, turning to small and cheap toys such as the Cyberjets (which saw the extensive use of balljoints, a feature that is now all but standard in the toyline), the Go-Bots (which were, in a nutshell, transforming 1:64 scale Hot Wheels cars, even being compatible with Hot Wheels and Matchbox playsets), Laser Cycles, and Auto Rollers; 1995 did, however, introduce the fan-favorite Laser Optimus Prime toy. The line was cancelled in 1995, and it seemed Transformers was finished. Enter Beast Wars...