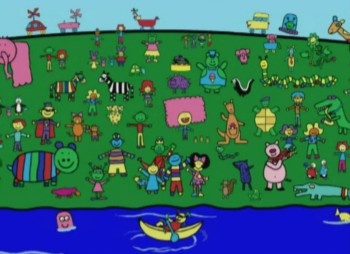 "It's a wonderful, colorful world!"
Advertisement:

ToddWorld was an animated children's series that aired for two seasons on Discovery Kids. Based loosely on a series of popular picture books by Todd Parr, each installment of the series focused on adventures in the daily lives of the main character, Todd, his talking dog Benny and his friends Pickle, Sophie and Stella, as well as a fairly large cast of guest characters. The series focused on celebrating the uniqueness of each individual— for example, the main character enjoyed wearing underwear on his head and eating macaroni and cheese in the bathtub. Other lessons including celebrating friendship and willingness to try new things. The program was notable for its theme song, "It's a Colorful World," performed by the celebrated R&B singer Smokey Robinson, as well as nominations for both the Daytime Emmys and the Humanitas Prize.

The series was aired in reruns on Qubo in the United States and is also available to many library users through a streaming service called Hoopla Digital. As of sometime in 2017, it is also available freely to stream for those subscribed to Amazon's video service, either through Prime or separately. The show's name is officially spelled in CamelCase. Which, yes, requires extra formatting to display properly on this wiki, but it's important to be correct.

ToddWorld includes examples of the following: