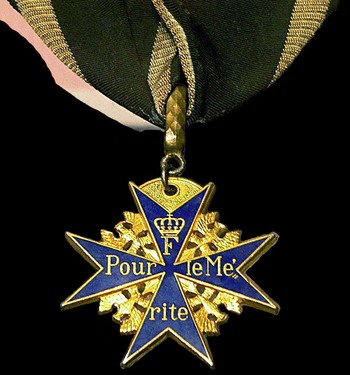 Prussia (and later Germany's) highest decoration... which featured an inscription in French, since it was the language held in the highest esteem by the king who created it.
Though this people used still their own speech, their kings and lords knew and spoke also the Elven tongue, which they had learned in the days of their alliance, and thus they held converse still with the Eldar, whether of Eressëa or of the westlands of Middle-earth.
— The Silmarillion
Advertisement:

A Noble Tongue is a language used by the upper classes of society when it differs from the Common Tongue generally used by this society.

Unlike Rich Language, Poor Language, this trope refers to another different and separate language.

See also Foreign Ruling Class for when this upper class is foreign and, as such, use the language of their homeland (apart from if they assimilated to their subjects). Another related case would be the case of an upper class under the cultural influence of another nation, such as in cases of conquests or colonialism.

Compare Classical Tongue, used exclusively by the well-educated; and Sacred Language, which survives only in religious services.

In linguistics, this situation is called diglossia

and the relevant languages are denominated sociolects