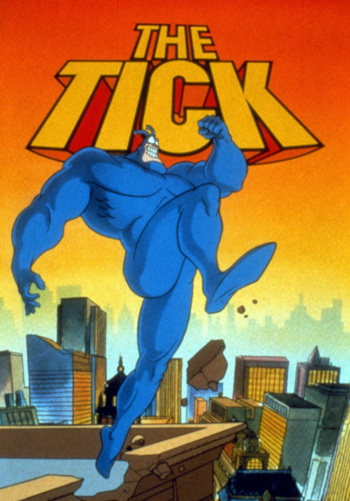 SPOOOOOOON!
"You know, evil comes in many forms, be it a man-eating cow or Josef Stalin, but you can't let the package hide the pudding! Evil is just plain bad! You don't cotton to it. You gotta smack it in the nose with the rolled-up newspaper of goodness! Bad dog! Bad dog!"
— The Tick, "The Tick vs. Arthur's Bank Account"
Advertisement:

1994 Animated Series, a casual but incisive send-up of Super Hero shows (based on an independent comic by Ben Edlund written in the early '90s), featuring as its title character a super-strong, "Nigh Invulnerable" (or so he says), and (probably) insane Cloudcuckoolander with hypertrophied senses of justice and melodrama, given to bold, thoughtless action and near-incomprehensible Aesop-like pronouncements. Assisting the Tick in his daily struggle against the Forces of Evil is Arthur, a former accountant, now moth-themed hero/sidekick. Frequently joining their adventures are Die Fledermaus and American Maid, two fellow crimefighters who bear a funhouse-mirror resemblance to Batman and Captain America respectively.

The Tick's adventures are evenly split between well-intentioned cluelessness and actual battles against supervillains. These villains — such as Chairface Chippendale, El Seed, Brainchild, and the Terror — are frequently just as bizarre as the Tick and his allies. Some, like the Evil Midnight Bomber (What Bombs At Midnight) ("One of these days, baby! Milkshake! Boom!"), have even developed their own fan followings.

In every episode, this program gleefully skewers the tropes and cliches of the Super Hero genre, distorting and twisting them like Silly Putty until they can stretch no more and snap back to hit you in the face. The resulting lunacy has spawned a cult following that continues to this day.

A Recap page is in progress here.

In 2001, Fox (who had aired the 1994 series through their Fox Kids block) attempted to revive the series in a live-action format with Patrick Warburton as The Tick, details are here.

August 19 2016 saw Edlund return to the character for a brand new live action series exclusive to Amazon Prime, starring Peter Serafinowicz in the title role. The series takes a gritter approach to the setting - but not to the character.

Thrakkorzog: Now you're doing it on purpose. How juvenile.
Feedback