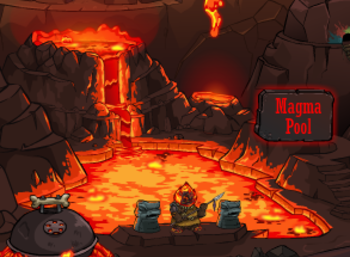 Looks like a nice place to take a swim.
Shrek: You can't tell me you're afraid of heights?
Donkey: No, I'm just a little uncomfortable about being on a rickety bridge over a boiling lake of lava!
— Shrek
Advertisement:

Like a swimming pool, but much more viscous and much hotter than water, and somewhat less inviting. Plus it's too dense to sink into and doesn't require you to periodically add chlorine or scoop out leaves. And it really doesn't matter if you don't wait an hour after eating before you jump in. A better simile, in fact, would be "not like a swimming pool." (cf.) Often used as a barrier rather than a trap proper, but with the right mechanisms and delivery chutes, a Lava Pit can make for a delightful surprise at the end of a long drop. Often found in a Lethal Lava Land.

In urban or outer space settings (where flowing lava is hard to find), you can substitute a blast furnace, trash incinerator, open nuclear reactor, vat of molten metal, or really, anything that's very hot and lethal to anyone dropped in. This version may overlap with No OSHA Compliance.

The Lava Pit can only work as a slow descending trap thanks to Convection Schmonvection — that wonderful law that says rising heat can't kill you and only touching the lava is fatal. Funnily enough, however, in many platform games, the lava seems to have sufficient viscosity for the player to launch him/herself into the air, shoes/backside on fire. You'll lose Hit Points, of course.

A subtrope of Lava Adds Awesome. May or may not be a part of Fire and Brimstone Hell.