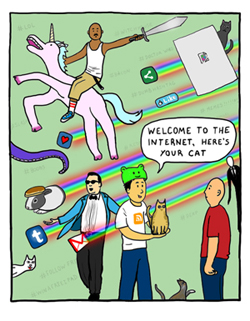 by Aram J. French is a weekly comic about life, love, and tacos. Early strips tended to be more morose than outright funny, while later strips have branched out to incorporate traditional comedy, sight gags and absurd situations.
Advertisement:

While the comic is single-panel and doesn't have an ongoing story, there are some recurring characters, including:

New comics are posted every Monday, because having to go back to work/school sucks.