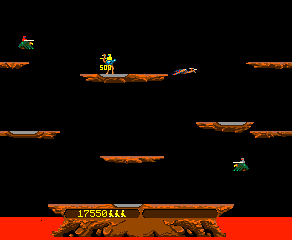 Joust is an arcade game produced by Williams Electronics in 1982, created by John Newcomer with art by Python Anghelo. The player controls a knight armed with a lance, mounted on either an ostrich (player 1) or a stork (player 2), who battles waves of computer-controlled enemy knights mounted on giant buzzards. These knights have three different speed and agility levels. The game screen is static; its only features are five platforms hanging in mid-air (some wrapping around the screen), the ground, and a pit of lava beneath.

The simplicity of its controls are a factor in the game's wide appeal. A joystick moves the mount left and right, and a "Flap" button flaps the mount's wings once. Pressing "Flap" in rapid succession will produce a gain in altitude until simulated gravity drags the mount downward.

Each wave begins with enemy knights appearing on the screen at one of four "spawn points". The three types of knights, from weakest to toughest, are: Bounder (red, 500 points), Hunter (gray, 750 points), and Shadow Lord (blue, 1,000 points). To destroy a knight and collect its point value, the player must collide with the knight while the player's lance is vertically higher than that of the knight. If the player's lance is vertically lower, he or she loses a life and is awarded 50 points.

After a knight is destroyed, an egg will fall to the ground. The player must touch the egg to destroy it before the egg hatches to produce another, more powerful knight. This hatchling is harmless and may also be destroyed by touch before the knight mounts a new buzzard. The award for destroying eggs and hatchlings progresses with each one collected, from 250 to 1,000 points in 250-point increments. This progression starts anew upon the death of the player or the beginning of another wave. Players are further rewarded with 500 bonus points for each egg caught before it touches the ground.

Two players can play Joust simultaneously, and each player earns points for destroying enemy knights as well as his human opponent. Cooperative play is possible by agreement, but accidental kills through collision remain possible. Completion of Team Waves award 3,000 bonus points each to players who successfully avoid killing one another. Gladiator Waves encourage players to kill each other by similarly offering 3,000 bonus points to the first player to do so.

During the first two waves, flooring at the bottom of the screen covers a lava pit, which is uncovered on the third wave as the floor burns away. On the fourth and subsequent waves, a troll inhabits the lava pit; if any player or enemy knight flies too close to the lava, the troll's hand will emerge and tug the mount down toward the lava. Players can escape the troll's grip by repeatedly pressing the "Flap" button.

A little-known sequel was produced, with the new ability to transform your mount into a flying unicorn (very heavy and difficult to keep in the air, but easier to kill enemies with) but it saw very limited distribution. The game also received a pinball adaptation, which was unique in that it was a two-sided machine in keeping with the "joust" motif; two players could go head-to-head for the high score.

In 2007, it was announced that CP Productions of Hollywood was actually going to try to adapt this game as a movie

(something creator John Newcomer had wanted to do for some time). Sadly or mercifully, the idea appears to have been scrapped.

Joust has examples of:

Thy Game Is Over