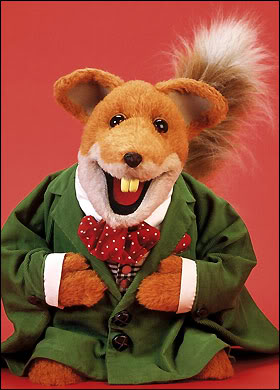 The Basil Brush Show is a CBBC series involving a fox puppet and its human companions. Originally running from 1968 to 1980 on BBC1, either during Children's Hour or the Saturday early evening slot, it has a tendency toward Breaking the Fourth Wall and using Double Entendre to appeal to adult (presumably parental) viewers as well as children. The BBC cancelled the show before picking it up again in 2002, complete with a Spin-Off, Basil's Swap Shop.

Basil Brush was designed by Bagpuss co-creator Peter Firmin and voiced by puppeteer Ivan Owen (who studiously avoided seeking any publicity for the role, feeling it made Basil more believable if no-one knew the identity of his "controller") until his death in 2000. The character first appeared in 1962 in a series called The Three Scampies about out-of-work circus performers, and was later paired with magician David Nixon for such series as Nixon at Nine-Five and The Nixon Line, where his comic antics proved such a hit with viewers that he was spun off into his own series.

In the 1968-80 incarnation of The Basil Brush Show, Basil had a series of human co-stars/comedy stooges, always addressed by Basil as "Mr. [actor's first name]"; in order, they included former Likely Lad Rodney Bewes, a pre-Yes, Minister Derek Fowlds, actor/singer Roy North, Three Scampies alumnus Howard Williams, and Billy Boyle. The episodes opened with a joke-filled introduction by Basil and his co-star, followed by a comedy sketch (which often included topical jokes), a musical number (often performed by a guest star, sometimes as a straight performance and sometimes as a comic duet with Basil), and finally a serial story about a famous relative of Basil's (such as spacefarer Blast-Off Basil or Robin Hood parody Basil the Farmer, Knight in Shining Armour) which would be frequently interrupted by jokes and asides from the fox himself. At the height of the series' popularity in the 1970s, actors and singers were queueing up for the chance to be the butt of Basil's humour for an episode.

Although Basil continued to appear on television sporadically across the 1980s and 1990s, it was not until 2002 that The Basil Brush Show was revived, with Christopher Pizzey as Basil's new comic foil, Mr Stephen, and child actors Georgina Leonidas and Michael Hayes as friends of Basil and Stephen's (as with Ivan Owen, the identity of Basil's voice actor/puppeteer remains a closely guarded secret). Other characters included Basil's hyperactive nephew Bingo, his criminal cousin Mortimer, latter-day hippie Madison, and Lethal Chef Anil. The revived series followed a more straightforward sitcom format with animated inserts and ran until 2007. Basil continues to make sporadic theatre and television appearances to this day.

Basil Brush and the polygraph

To determine his responsibility in the robbing of the world's major banks, the gold reserves of Fort Knox (and even his own piggy bank), Basil Brush is subjected to a polygraph test.

Basil Brush and the polygraph

To determine his responsibility in the robbing of the world's major banks, the gold reserves of Fort Knox (and even his own piggy bank), Basil Brush is subjected to a polygraph test.