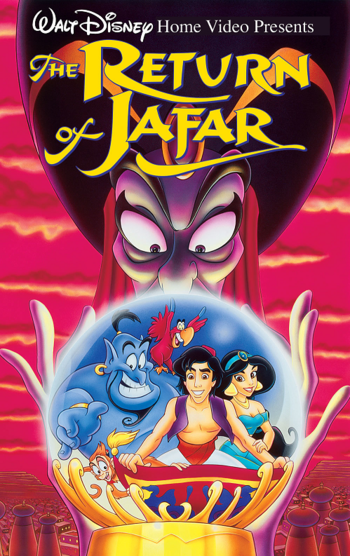 Jafar is back and he's out for revenge!
Released in May 1994, The Return of Jafar is the first sequel to Disney's Aladdin.
Advertisement:

Some time after Aladdin defeated the evil sorcerer Jafar, he is living with Jasmine in the Sultan's palace in Agrabah, adjusting to his new life as an incredibly rich guy. Genie returns from a long vacation throughout the world, and has come to stay for good. Somewhere in the distant desert meanwhile, the geniefied Jafar and his pet Iago dig themselves out of the sands where Genie buried them. Iago abandons his master to start over, and soon finds himself in Agrabah again. Aladdin decides to take the former villain in after he saves him from some vengeful thieves. When Jafar is freed from the lamp by Abis Mal, a foolish thief with a grudge against Aladdin, Jafar unfolds his plan to destroy his enemy and everyone he loves.

It was intended to be the introduction to Aladdin: The Series, and eventually Aladdin and the King of Thieves.

Aladdin: The Return of Jafar provides examples of:

Alternative Title(s): The Return Of Jafar