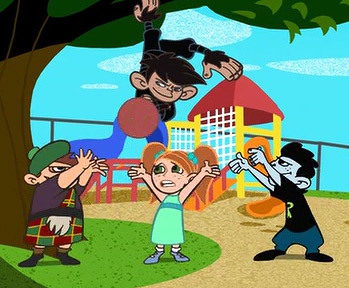 The game of tossing an object around in a group to keep it away from someone else.

In one scenario, the heroes are trying to keep the MacGuffin away from the villain or villains. Said villain is so focused on the item that they're not fighting the heroes who don't have it.

The answer is to throw the MacGuffin from hero to hero, with the villain being frustrated as he barely misses it each time. If there's a group of villains, expect multiple "yoink!" moments as the groups intercept it from each other.

In another scenario, the protagonist might be quietly minding his own business on the schoolyard when a group of bullies come up and take something of his, then pass it around to another one whenever he gets close. If he can make a plausible threat of getting them in trouble, expect them to transparently lie and claim that it was only a game; otherwise, they might just keep the MacGuffin. One way or another, the protagonist will need to find an effective way to deal with the bullies.

Polar opposite of the MacGuffin Delivery Service and Hot Potato. If the heroes and villains get into a physical scuffle during the "Keep Away" session, it's a MacGuffin Melee.

Pursued by a group of Aguma Soldiers, Xavitan and Darunia toss the water regulator device between each other to keep it out of the Aguma's hands.

Pursued by a group of Aguma Soldiers, Xavitan and Darunia toss the water regulator device between each other to keep it out of the Aguma's hands.