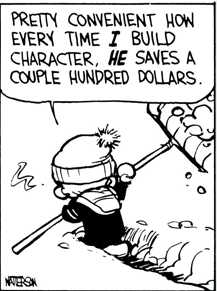 And Alice milks it for all its worth.

Mooching Master refers to a very particular type of teacher-student relationship: the student is indebted to the master and the master takes advantage of it for personal gain. This is not merely the master asking for money, that'd be too simple. The master actually asks for things that go from annoying to illegal to even life-threatening. But the student owes so much to the master, he feels obligated to comply out of a desire to honor her.

This trope is almost always played for laughs, even in a serious work, and the master is usually not actually malicious. This doesn't mean her mooching is harmless, though, it can actually make the student get in loads of trouble trying to please his master. And the teacher, while she might be teaching the student with her antics, is, when all's said and done, genuinely taking advantage of him to a degree.

Compare Wax On, Wax Off, where the chores the student is performing are actually genuine teaching tools. Trickster Mentors are very fond of this trope. The Svengali is a more malicious version, hobbling their students' growth to continue to take advantage of them. Compare Fair-Weather Mentor, who exploits their students for accolades instead of money.