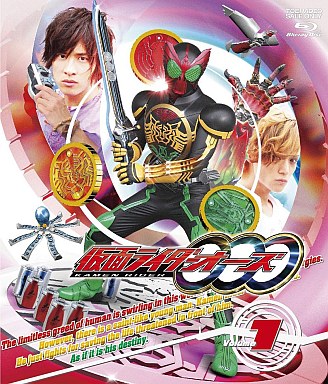 TA-TO-BA! TATOBA TA-TO-BA!
"You count the Medals, one, two, and three! Life goes on, anything goes, coming up OOO!"
— The Gratuitous English first line of the opening lyrics.
Advertisement:

Kamen Rider OOO (OOO is pronounced as "O's" or "Owes", not like the Land of Ooo in Adventure Time) is the 2010-2011 Kamen Rider series and twelfth entry in the franchise's Heisei Era.

The story opens with the reawakening of the Greeed [sic], a race of powerful monsters created hundreds of years ago with alchemy. Each Greeed is made up of magical coins called Medals: "Core Medals" which serve as the foundation of their being, and "Cell Medals" that compose their matter. Driven by their own insatiable hunger, the Greeed seek to consume as many Medals as possible to increase their strength, harvesting Cell Medals from human desire while searching for their missing Core Medals, a complete set of which will unleash their true, terrible power upon the world. There is also a prophecy which states if a single being is able to gather all of the Core Medals, they will become the destined "Multi King" of the Greeed.

Enter Eiji Hino: an Unlucky Everydude and vagrant without any kind of drive, ambition or passion. He runs into Ankh, a bird-type Greeed whose body has been reduced to a single arm. Having plundered several Core Medals from the other Greeed but without a body to use them, Ankh manipulates Eiji into accepting a forbidden Transformation Trinket and using his Core Medals to transform into Kamen Rider OOO. Eiji just wants to use the power to protect others, but Ankh plans to use the naive boy as his Unwitting Pawn to destroy the other Greeeds, rebuild his body from their Medals, and seize the power of the Multi King for himself. There's also the Kougami Foundation, an Omniscient Council of Vagueness who pledge their resources to help Eiji in his fight against the Greeed.

The major recurring theme in Kamen Rider OOO is about "desire"note Yokubō or "greed". The interesting part is that rather than painting a clear Black-and-White picture about the topic, their story advocates a healthy balance between all-consuming obsession and a purposeless void; in short, it presents a pragmatic view about desire.

Kamen Rider OOO's airing also coincided with the 40th anniversary of the franchise. So, even though he was never promoted as an anniversary Rider, OOO ended up headlining a commemorative 1000th episode of the Kamen Rider series and even the OOO, Den-O, All Riders: Let's Go Kamen Rider movie, where the DenLiner crew and even Rider 1 and 2 also receive a fair amount of focus, but the story was generally told from the OOO cast's point of view.

Aired alongside Super Sentai shows Tensou Sentai Goseiger and then Kaizoku Sentai Gokaiger, teaming up with the latter in Super Hero Taisen, in the Super Hero Time block.

Voted #3 series in the Heisei era and #3 product overall in NHK’s All Kamen Rider Popularity Vote.

open/close all folders
Tropes associated with the Rider concepts of Kamen Rider OOO:

You count the tropes, one, two, and three!

By inserting all three green Core Medals (Kuwagata/Stag Beetle, Kamakiri/Mantis and Batta/Grasshopper) into the OOO Driver, Eiji Hino (Kamen Rider OOO) gains the ability to split himself into countless copies, each one equally as strong as the real deal. Perfect for dealing with a massive horde.

By inserting all three green Core Medals (Kuwagata/Stag Beetle, Kamakiri/Mantis and Batta/Grasshopper) into the OOO Driver, Eiji Hino (Kamen Rider OOO) gains the ability to split himself into countless copies, each one equally as strong as the real deal. Perfect for dealing with a massive horde.