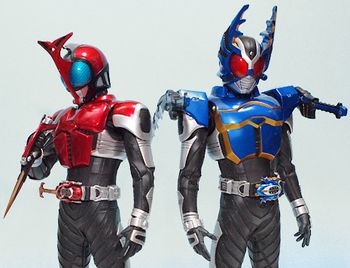 Japan loves bugs, and they're everywhere. Not only is Bug Catching one of the oldest pastimes in the country, but much of their pop culture includes or is influenced by them.

, though often romanized by the Japanese as simply "beetle") and Kuwagatamushi (stag beetle

). Often, when something inspired by one of the two appears in some sort of media, the other is either alongside them, or not too far behind. Another common element is for the two beetle-inspired elements to be of contrasting colors, and there is often a Red Oni, Blue Oni relationship between the two.

There have been enough examples that they can be organized into three types:

Two particular species have a tendency to show up as "upgraded" forms of the duo: the overbite-horned Heracles Ōkabuto (Hercules beetle

) as a more powerful Kuwagata. Likewise, the Atlas

beetles will sometimes receive this treatment since their three horns resemble a combination of Kabuto and Kuwagata traits.

Also related is the Beetle Sister, the Tentomushi (ladybug/ladybird/lady beetle); whenever beetles form a Power Trio, you can expect The Chick to be a Ladybug.

Rarely, this phenomenon will be referenced obliquely. If two characters with some sort of relationship exist in your medium — and one has a single horn and the other has two, chances are this is why.

See also Tanuki/Kitsune Contrast, for a similar dynamic between the two youkai. Compare Tough Beetles, which often overlaps with this trope.