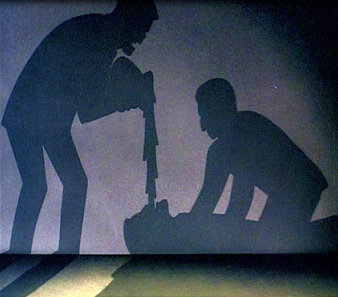 "Let's give him all he'll EVER need!"
Advertisement:

Moral Guardians really do not like kids seeing things like violence, torture, death, or creepy transformations straight up. So Animated Series tend to get around that by alluding to them. A shadow thrown by the events the Moral Guardians would not want showed directly is all the viewer gets to see. Sometimes there's a witness standing in the shadow looking shocked, horrified, disgusted, etc.

Sometimes it is a dodge for a live-action or other movie, because the imagination of the audience/viewer will do all the real work. Also, it is sometimes better to imply through shadowplay than to use an actual shot because the special effects will not be sufficient to uphold the Willing Suspension of Disbelief ... or it is simply too difficult to render safely with real actors. In Crime and Punishment Series, it is also useful as a way to keep the murderer's identity hidden.

Least frequently, it is a cue to the viewer and characters within the work that something is off about the person whose shadow we are viewing; a Living Shadow perhaps.

Compare and contrast with Gory Discretion Shot and Sound-Only Death. Played for laughs or deception, you end up with Big Shadow, Little Creature. See also The Shadow Knows. Not to be confused with Censor Shadow (in which the scene is viewed directly with key portions hidden in shadow). Related to Vomit Discretion Shot but obviously less horrifying.