In this movie, pussy eats you! 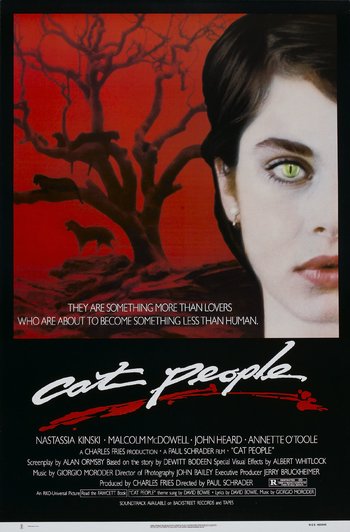 1982 remake
"Even as fog continues to lie in the valleys, so does ancient sin cling to the low places, the depressions in the world consciousness."
— Dr. Louis Judd, The Anatomy of Atavism
Advertisement:

Irena (Simone Simon) is a Serbian woman living in America who believes that if she is ever kissed by a man, she will transform into a deadly panther due to a family curse brought on by medieval dabbling in witchcraft. Her American co-workers try to persuade her otherwise, including Oliver Reed (Kent Smith), who wants to marry her. Turns out, she's right and they're wrong.

Spawned a sequel (kind of) in 1944, The Curse of the Cat People, which follows two of the characters from the first film and (apparently) a third one who had seemed to be dead at its end; it didn't really deal with the "cat people" angle at all, and dropped the "dangerous sexuality" theme in favour of exploring the importance of childhood imagination. It's not even in the same genre as the original, being more of a drama about family life than a horror film. It's also notable as the directorial debut of Robert Wise.

There was also a 1982 remake, directed by Paul Schrader and starring Malcolm McDowell and Nastassja Kinski; it was more of what would later be called a "reimagining" than a straight remake, as it made Irena the protagonist rather than Oliver, introduced a new male co-lead in the form of her brother Paul, and changed the cat people's origins from medieval witchcraft to prehistoric Human Sacrifice. It was also a great deal bloodier and more salacious than the original, and generally preferred to show what the original merely suggested. It's also notable for the soundtrack, a collaboration between Giorgio Moroder and David Bowie.