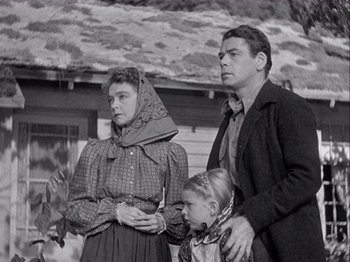 Commandos Strike at Dawn is a 1942 film directed by John Farrow.

It's a World War II propaganda film about resistance in Norway. The story opens in August 1939, depicting a peaceful Norwegian fishing village. Paul Muni, the least Norwegian-looking man ever, plays Eric Toresen. Eric is a local weatherman and oceanographer for the government, a widower, and a single father. A British admiral, Adm. Bowen, is vacationing in the town, along with his son Robert and his lovely daughter Judith (Anna Lee). Romance blossoms between Eric and Judith, but they are soon separated by war.

Cut to April 9, 1940, and the German invasion of Norway. The Germans roll into Eric's village unopposed, and right away they start doing Nazi things like burning books, confiscating food and blankets, and brutally torturing Mr. Bergesen (Ray Collins), the most vocally anti-German person in the village. Soon mild-mannered Paul is organizing an anti-Nazi resistance group. Eventually he and a few others escape to Britain by fishing boat, and help to organize a British commando raid on their town.

Lillian Gish appears as Mrs. Bergesen. It was her first film in nine years and typical of the character parts she played for the rest of her movie career. Compare Edge of Darkness (1943), a film with a similar story of resistance in a Norwegian fishing village.