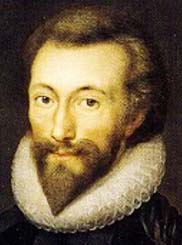 If yet I have not all thy love.
Dear, I shall never have thee all;
—John Donne, Lover's Infiniteness
Advertisement:

John Donne (22 January 1572 – 31 March 1631) was an English poet and one of the most prominent figures of a group of poets known as the "metaphysical poets". He was born into a recusant Catholic family, but he eventually converted to the Anglican faith and became one of its clerics.

He inspired poets like T. S. Eliot, and also the title of the Ernest Hemingway novel For Whom the Bell Tolls.