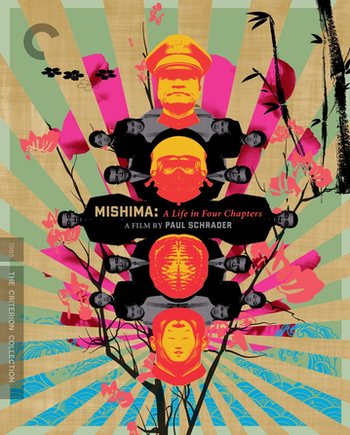 "All my life I have been acutely aware of a contradiction in the very nature of my existence. For forty-five years I struggled to resolve this dilemma by writing plays and novels. The more I wrote, the more I realized mere words were not enough. So I found another form of expression."
— Yukio Mishima
Advertisement:

Mishima: A Life In Four Chapters is a 1985 film directed by Paul Schrader (writer of Taxi Driver) and co-produced by Francis Ford Coppola and George Lucas. It is a complexly structured biography of Japan's most famous modern writer, Yukio Mishima (portrayed by Ken Ogata,) and consists of four chapters (Beauty, Art, Action, Harmony of Pen and Sword) which are made up of three stylistically distinct threads woven together throughout each:

The Mishima novels visited (except Confessions of a Mask, which is semi-biographical and blends in with the other flashback sequences) include:

Due to the movie being Japanese with subtitles (except for the English narration) and the demands it placed upon its viewers, the movie failed to turn into a commercial success, instead becoming a favorite of critics and winning the award for Best Artistic Contribution at the Cannes Film Festival. It is also notable for having a simply stunning score composed by Philip Glass, a significant part of the film's beauty.