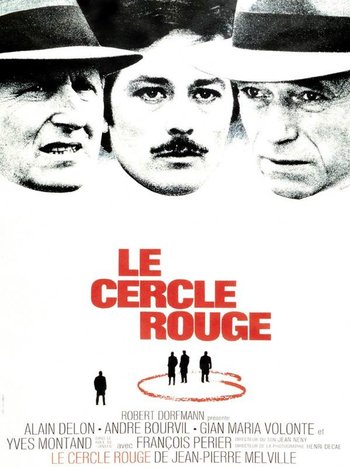 "Siddhartha Gautama, the Buddha, drew a circle with a piece of red chalk and said: 'When men, even unknowingly, are to meet one day, whatever may befall each, whatever the diverging paths, on the said day, they will inevitably come together in the red circle.'"

Le Cercle Rouge (The Red Circle) is a 1970 film directed by French filmmaker Jean-Pierre Melville. It was his next-to-last film.

Corey (Alain Delon), who is about to be released from prison, gets from a prison ward a hint for a possible jewel heist. Meanwhile, Vogel (Gian Maria Volonte) manages to escape from commisioner Mattei (Bourvil) who was escorting him in a train from Marseille to Paris. Vogel decides to hide in the trunk of the next best car at a nearby roadhouse and as fate would have it, Corey's car is the only with an unlocked trunk. Corey then gets through the police block and after some initial problems they become friends and decide to go to Paris. After a run-in with two mooks, Corey lets Vogel in on the jewel heist plans, but Vogel tells him that he is not what Corey was looking for and recommends Jansen (Yves Montand) for this particular task. All the while, Mattei is looking to find Vogel. He tries to get information from a night club owner called Santi who seems to know Vogel, he learns about the run-in with the two mooks concluding that Vogel was possibliy involved and from an anonymous informer he gets the names of the men involved in the jewel heist.

The heist itself is carried out without any incidents but afterwards their fence refuses to take the jewels because it would take him months to find a buyer. To make contact with a new fence, they decide to go to Santi, thereby sealing their fate.

Compare Rififi, a film from the 1950s that also was made in France, also involves a gang of cons plotting The Caper to rob a jewelry store, and also features a long dialogue-free heist sequence.