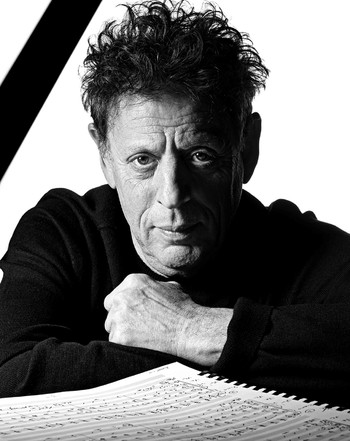 Philip Glass (b. January 31, 1937) is an American composer known for his work in minimalist music. He first came to prominence with his experimental opera Einstein on the Beach, and since then has written prolifically for theater, film, and concert hall alike. He also founded and directs the Philip Glass Ensemble, which has produced acclaimed performances and recordings of much of his music.

His music characteristically features repetitive arpeggios and ostinati that slowly evolve and develop harmonically over time. His work in film scores makes him one of the most recognizable and successful composers working today. For the concert stage, he's written at least 15 operas, 14 symphonies, 9 string quartets, and a long list of works for chamber ensembles, orchestra, and solo instruments.

Glass's work, while never popular in the mainstream eye (due to both its avant-garde nature and classical music in general having taken a backseat in the music world for centuries), has been highly influential on actually mainstream artists. In particular, Glass' work was a considerable source of inspiration for David Bowie, who would inspire Glass in turn to compose works based on Bowie's music, and Talking Heads, who took cues from his brand of minimalism during their own trysts with abstract, avant-garde-inspired rock, which itself would continue to influence later mainstream artists to this very day. As a result, Glass could be considered one of the most influential obscure artists by pure proxy.

Fun fact: Philip Glass is the first cousin once removed of This American Life host Ira Glass. They've recorded a few conversations for the program, talking about each other's work.

Works with music by Philip Glass include: