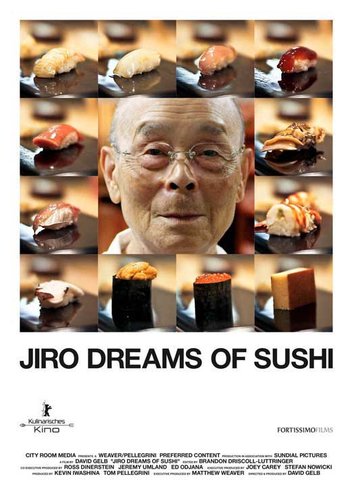 Jiro Dreams of Sushi is a 2011 documentary by David Gelb focusing on Jiro Ono, the 85-year-old owner and head chef of Sukiyabashi Jiro, a (then) three-Michelin-starred ten-seat sushi restaurant in Ginza, Tokyo.note In 2019, it was stripped of its stars because Michelin requires that featured restaurants directly accept reservations from the general public. Jiro's restaurant requires that prospective customers book via the concierge at a nearby luxury hotel.
Advertisement:

The film outlines Jiro's incredible dedication to his pursuit of the perfect sushi, the career paths of his sons Yoshikazu and Takashi and various apprentices, the fine details of sushi-making, of selecting the right fish, and so on, interspersed with shots of delicious sushi and set to a Philip Glass soundtrack.