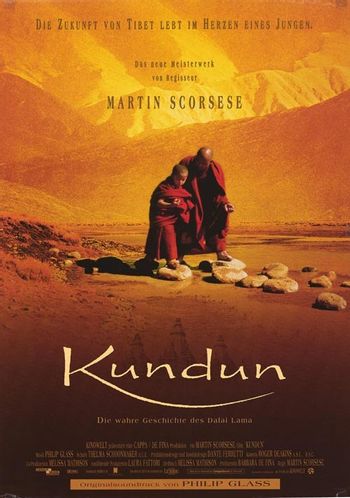 Indian Soldier: "May I ask, are you the Lord Buddha?"
The Dalai Lama: "I think that I am a reflection, like the moon on water. When you see me, and I try to be a good man, you see yourself."
Advertisement:

Kundun is a 1997 Epic Movie written by Melissa Mathison and directed by Martin Scorsese, with a score by Philip Glass. It is a Biopic of the youth and early career of Tenzin Gyatso who would become the 14th Dalai Lama and The Leader and spokesman for the Tibetan Government-In-Exile. Various actors play the Dalai Lama in various ages with the adult version played by Tenzin Thuthob Tsarong, the grand-nephew of the current Dalai Lama. Several non-professional Tibetans play key roles in the film, most of which was shot in Morocco.

The story follows "Kundun" (the presence) from his youth, as the son of a small peasant family in the outskirts of Tibet. Little Tenzin Gyatso passes the test of the Lamasery and the Regent Reting Rinpoche and eventually gets installed at the Potala Palace in Lhasa. His time as the Dalai Lama takes place in the middle of the 20th Century when the violence of World War II and the nationalistic convulsions in China and India makes the Tibetans insecure. The Dalai Lama, impressed by Western ideas and sympathetic to reforms, starts to implement changes in Tibet, on the onset of the encroachment of China into Tibetan territory.

The film was produced by Touchstone Pictures (owned by Disney) but was controversial for its subject matter. The film was criticized and banned by the Chinese government as well as the film-makers behind the production.