Film / The King and the Clown 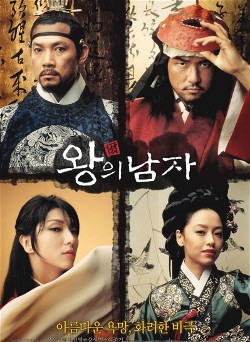 Set in 16th century Korea, Jang-saeng and Gong-gil are exceptionally good jesters in a small-time performing troupe. Despite their skill money is sparse and to increase earnings the troupe master prostitutes Gong-gil to rich patrons. The film begins with Jang-saeng finally snapping and convincing Gong-gil to run away to Seoul with him.

From there things get worse.

After competing with the self-proclaimed best clowns in Seoul they find themselves both with potential troupe mates and great material for their show—the sexual exploits of the king. Though popular their act quickly finds them arrested, and it is only through Gong-gil and Jang-saeng making a spectacular saving performance in front of the king himself that allows them not only to live, but also be taken on permanently in the royal court.

However, court life is beset with peril as the bloodthirsty King Yeonsan, his jealous consort, and the resentful advisors come constantly in conflict. The jesters are unable to avoid getting caught up in it, due to their highly controversial shows and to the King's increasing obsession with the beautiful Gong-gil. Once again Jang-saeng and Gong-gil find themselves lead down the same road they started, but the stakes are much, much higher.

The film is particularly notable for being a relatively low budget production starring few famous actors which highly features the traditional arts and has homosexual undertones, yet broke all Korean box office records before it. Interestingly it also came out the same year as Brokeback Mountain.

Watch at your own risk.