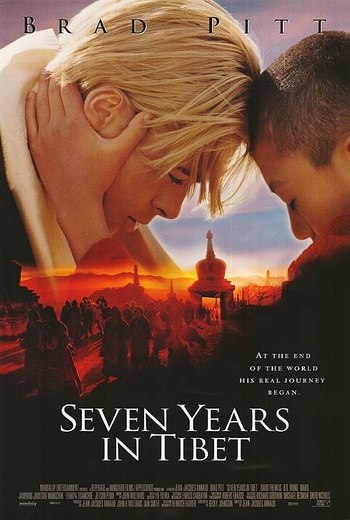 A 1997 film starring Brad Pitt and David Thewlis and directed by Jean-Jacques Arnaud.

Pitt stars as Heinrich Harrer, an Austrian mountain climber who travels to British India in 1939 with the intention of climbing the Nanga Parbat mountain in Kashmir. While in India, war breaks out, and Harrer and his climbing partner Peter Aufschnaiter are arrested by British forces and imprisoned near the Tibetan border. This begins their extended stay in Asia, which climaxes in 1944 when they escape to Tibet and take refuge in its capital, Lhasa. There, Harrer meets and befriends the young 14th Dalai Lama, and becomes one of his tutors. Harrer remains in Lhasa until the People's Republic of China annexes Tibet in 1950.