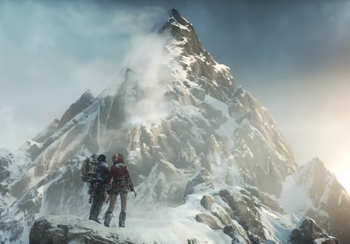 "There is competition between every person here and this mountain. The last word always belongs to the mountain."
— Anatoli Boukreev, Everest (2015)
Advertisement:

Why are we Describing Scaling The Summit Here? Because it's there.

This is about someone climbing a mountain. We're not talking about some hill that casual outdoorsmen can hike up and down on a weekend, rather the really big, ice-clad peaks. This is something that requires considerable resources, time and planning.

Once they start up the mountain, they are at its mercy. There are a thousand things that can go wrong, and if one does, escape may or may not be an option. So why would anyone make the trek? Perhaps for the flowers that are up there, or maybe they are seeking the wise old hermit. maybe they just want to get away from everything, or are drawn to the challenge. Whatever their reasons, they will now have to face the dangers that lie between them and the summit.

In the early days, such expeditions were almost always government commissioned in the race to put their flags in the highest places in the world. Characters in these settings are often the Bold Explorer or sometimes Gentleman Adventurer. In modern times, climbers are just as likely to be wealthy individuals on an adventure vacation.

In fiction, there are two ways this is usually seen. First as the main driving force of the plot, wherein the climb is the story and the conflict is the struggle with the mountain. Otherwise, it can be shown as a major challenge in a larger story, or sometimes the climb is what puts the heroes in place for the story's events to be kicked off. While it may be set on any mountain anywhere, it has a high likelihood of taking place in Yodel Land (the Alps) or The Shangri-La (the Himalayas).

Or they could just be shown up there because it's cool... literally.

While up there, there are a number of things that are bound to happen, because they make for good story telling, and a lot of them do in fact happen on a mountain climb. Hair Trigger Avalanches and ice crevasses are some of the hazards. Chances are also good for a Climb, Slip, Hang, Climb to occur or for someone to Cut the Safety Rope. Oh, and don't forget the Yeti.

Compare with Climbing the Cliffs of Insanity, which can be an aspect of the mountain and Death Mountain, a related video game environment which may or may not involve climbing. See also the "Because They Are There" entry from Ebert's Glossary of Movie Terms that lists "The top ten lines you can always count on in a mountain-climbing movie".

Sub-Trope of Journey to the Sky.