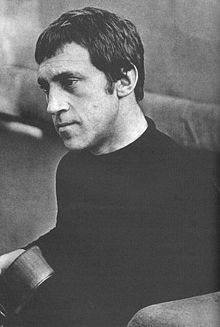 Vladimir Semyonovich Vysotsky (Russian: Влади́мир Семёнович Высо́цкий, 25 January 1938 – 25 July 1980) was a Soviet singer, poet, and actor, or "bard" (often considered the greatest of the Soviet bards). He started out acting in Hamlet and Life of Galileo, but soon fell out of official favor due to the material in his songs. While the Soviet government encouraged positivism in music, Vysotsky preferred to sing about the harsh realities of life, always strumming his seven-string guitar. Several of his songs appeared in movies, and throughout the late 1960s and the 1970s he was popular underground. He died in 1980 of heart failure brought on by drug abuse, and over a million people lined the streets of Moscow at his funeral. He has been compared to Alexander Pushkin, Bob Dylan, and Jacques Brel.

His works features examples of: