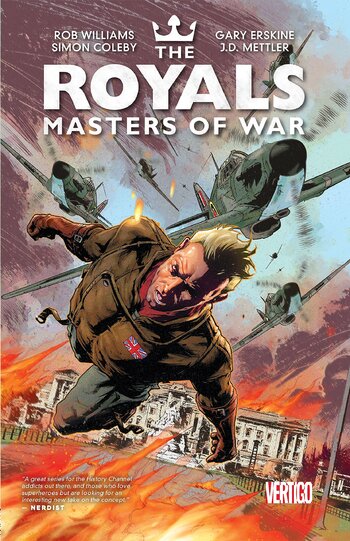 The Royals: Masters of War is a six-issue comic series by Rob Williams and Simon Coleby that was released in 2014. Following King Albert of The British Empire and his children, it starts off around 1940 in an Alternate Universe version of World War II that at first glance very much follows our own world's history. Save for one large difference: this is a world where the Divine Right of Kings takes on a far more literal meaning.
Advertisement:

For countless centuries, royal families have ruled the world. Their divine right to command the common people has manifested itself not just through crowns and thrones, but also in the form of fantastic and deadly superpowers that no mortal army can match. Then came the revolutions. As democracy, industry and communism spread across the globe, their growing strength made the royals timid, and a new generation of rulers swore a solemn vow never to use their powers in battle again. Now as the Second World War rages unchecked and bombers blitz London, Leningrad and Pearl Harbor, that vow is tested to its breaking point - and led by the spoile scions of the King of England, the world's sleeping giants are beginning to stir at last.

Compare with Über, which follows a similar premise. With similarly disastrous results.